Starting early next year, popular messaging app WhatsApp will stop working on millions of smartphones which are still active up to date 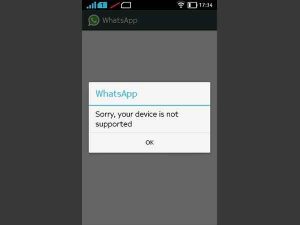 Unlike iPhone and Android users who can use the platform until February next year, Windows Phone users are not so lucky. WhatsApp also plans to end support for all Windows Phone devices on December 31 2019.

This coincides with Microsoft’s plans to also end support for the platform altogether. This means that any of you still using a Windows Phone device, it’s really time to upgrade to something else.

According to the Facebook-owned messaging platform, the reason they are killing support for these legacy operating systems is that the platforms do not offer support for the kind of features WhatsApp plans to implement.

“This was a tough decision for us to make, but the right one in order to give people better ways to keep in touch with friends, family, and loved ones using WhatsApp,” Read a message from the company

Melissa Mwiti
16:28 12 May 20
Guys, I should have done this earlier... Thank you so much for the new lease of life you gave to my HP laptop. It's... performing much better than I expected and I am so glad I found you guys :) :)read more

Annyustar Mugure
13:56 20 Apr 20
They were professional and did exactly what they said they would do. Prompt and a good job well done. Thank you very... much. Highly recommended.read more

Gavin Kwame
19:57 14 Mar 20
I had my Huawei Y9s fixed within the same day. Was also privileged to get unique accessories like covers and a pair of... earphones. Above all, good customer service. Six star experience! 👌read more

Peter Githenya
12:07 13 Mar 20
It is the best electronic shop with the most effective and efficient professionals to have your phones, laptops, and... other electronic gadgets fixed. Its customer care is just excellent. The environment is just serene. Relax, these guys got you!read more

Jane Nderitu
14:24 04 Mar 20
Thank you wefix team. You have good customer service. You fixed my mate 10 lite phone which had an issue with the... screen and a swollen battery and the made it back to new. Great service. Big up guysread more

Kenneth Karanja
15:25 24 Feb 20
I had screen & battery issues with my iphone & the we-fix team did a great job diagnosing & fixing the problem. Now my... phone is as good as new. They have quality services not to mention the warm reception.read more

Patrick Mburu
07:49 20 Feb 20
Nice repair shop for electronics. They also sell phone accessories. I had a challenge with a job they had done for me... but my complaint was handled professionally by the friendly staff.read more

brian mandela
17:40 31 Jan 20
Great customer care and services. Worth your money. Thanks for the services.

Montana Njaaga
18:47 21 Dec 19
Friendly and homey. After my screen cracked I was devastated. I was desperate. Their price for replacing my screen was... reasonable, considering their location. As I said the staff are friendly and the space looks chilled and clean. Keep it up!read more

emanuel akomo
11:27 05 Dec 19
Efficiency and convenience is what I experienced at WeFix. Keep it up guys. I recommend Wefix Tech for their... professionalismread more

my importers
10:33 11 Nov 19
These Guys Are Excellent in Delivery, I Delivered My Phone,Waited and in 45 Minutes I Had it Done.Very Clean, Securea... Convenient Location.No Hasslesread more

Beauttah Wandera
07:21 17 Sep 19
Fixed my broken screen that was shoddily done by a supposed dealer. Device is as as good as new. Then they follow up on... device functionality just to make sure you're a happy customer. I recommend Wefix Tech for all your device repair with 100% confidence they'll do a splendid job.read more

Reen Kimberly
05:10 17 Aug 19
Professional repairs and great customer service... Took my HP laptop for fixing and they did a good job. Thank you.

James Karundu
17:57 15 Aug 19
My office phone was fixed in record time. It had a cracked screen. The job was well done + we experience great... customer service. I highly recommend We fix Tech for phone and tablet repairs.read more

Johnson Kyama
07:57 05 Aug 19
Very proffesional, very thorough on their work and excellent customer service. The customer service team are very... friendly and welcoming. Definitely worthwhile and would recommend it to anyoneread more

Dennis Wairey
14:13 11 Apr 19
WeFix Tech really came through for me today! 🙌🏽 They came for my iPhone from our office, fixed it and brought it... back on the same day!! Did I mention that they gave me a free phone to use for the day while they were fixing mine? Oh yes they did! 😁 #HappyClientread more
Next Reviews
Contact Us

You have Successfully Subscribed!