And no you dont have to be spiderman or mrs elastic.

While the above tricks will get you pretty far, there are other things you can do to make reaching your apps even easier. A bit of home screen organization, for example, can go a long way—either on its own or in addition to the reachability tools we’ve already talked about.

Back in the Era of iPhone 4 and 5 Apple phones seemed diminututive compared to their apparent competitors.

The company claims they did so to keep the phones usable with one hand. They eventually caved, though, and even today’s smaller phones
(like the iPhone 8 and Pixel 3a) are huge compared to whet we had a few years ago.

There are, however, a few tricks and tools meant to help those with short thumbs deal with those large screens

You may be surprised to learn that your phone actually has a one-handed mode built right in, designed to make all those icons easier to reach. The iPhone’s version is called Reach-ability mode, and I find most people enable it by accident and think it’s some sort of glitch, rather than a useful feature.

That might be why Apple disabled the feature by default in iOS 12, but you can get it back by heading to Settings > General > Accessibility and toggling Reachability on. From there, you can either swipe down near the bottom of the screen (on the iPhone X and up) or double-tap—not click, but tap—the home button (on the iPhone 8 and older) to shift your home screen icons down for easy access.

Android is a bit more fragmented. Many phones, including Samsung’s, have their own one-handed mode. On Galaxy devices, you’ll find it in Settings > Advanced Features > One-Handed Mode. If you have a non-Samsung phone, you may have to dig around the settings to find it.

If your device doesn’t contain this feature—like Google’s Pixel phones, for example—third-party tools can fill the void. Popular mobile site XDA Developers created their own application called One-Handed Mode that you can download from the Google Play Store. When enabled, it’ll shrink the active app so you can reach everything with one hand. It requires a little command line work with the Android Debug Bridge (ADB) to grant permissions, but it’s not as much work as rooting your phone, and the instructions here will walk you through the process. You’ll also want to pony up the 99 cents for the in-app purchase that lets you easily toggle the feature on and off, not to mention other customizations.

If you want something a bit different, Reachability Cursor is another popular tool, giving you a mouse-like cursor to reach faraway icons on the screen. It’s not quite as quick and easy to use as One-Handed Mode, but it’s much simpler to set up since you don’t need any fancy command line work. Bottom Quick Settings is a good companion app, too, allowing you to reach Android’s Quick Settings panel from the bottom, rather than the top, of the screen. 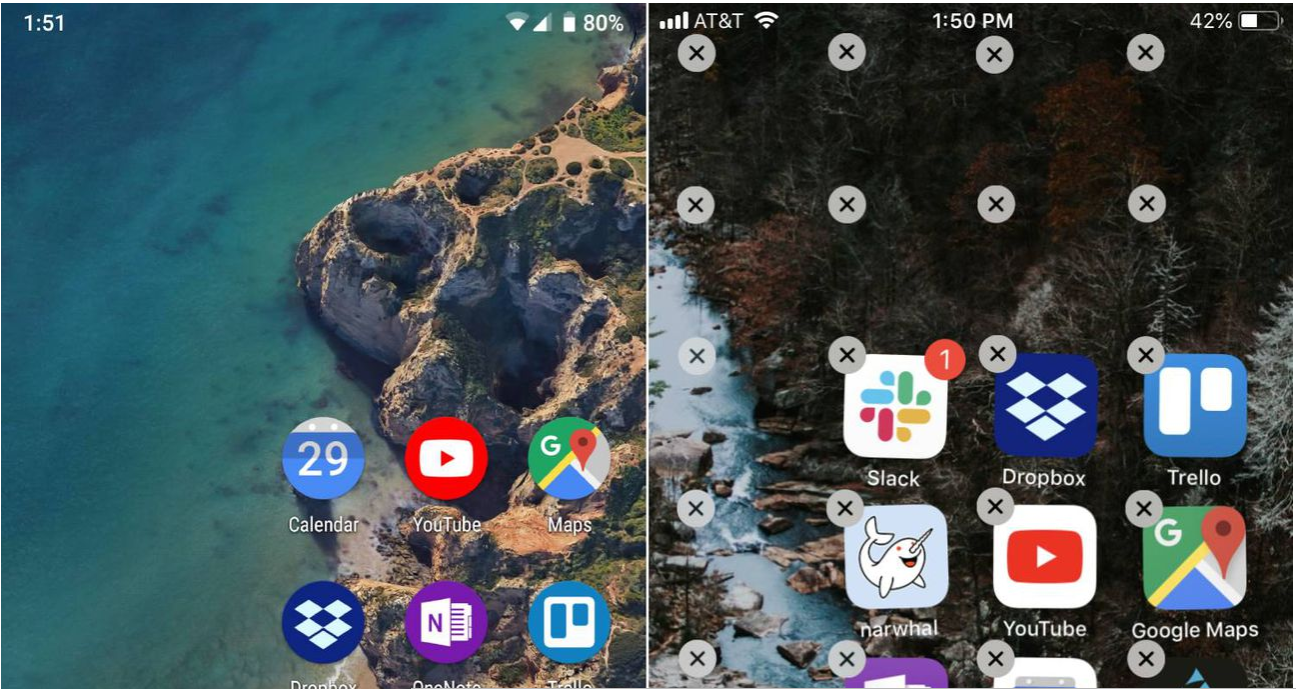 While the above tricks will get you pretty far, there are other things you can do to make reaching your apps even easier. A bit of home screen organization, for example, can go a long way—either on its own or in addition to the reachability tools we’ve already talked about.

Both iOS and Android allow you to rearrange your home screen apps by pressing and holding on the icons to move them around. Put your most-used apps in the bottom right corner of the screen (or bottom left, if you’re a southpaw) and they’ll be a lot easier to reach. Android even allows you to leave the unreachable portion of the screen empty, so all your apps are reachable. iOS forces you to arrange your icons in a grid, but you can use a tool like Makeovr to create invisible icons, thus allowing you to push all your apps to an easily reachable corner while leaving the rest of the screen “empty.” Be sure to open Makeovr in Safari, as it won’t work in the iOS version of Chrome.

Android users have a few more tricks up their sleeve in this realm, too. With third-party home screen launchers like Nova, you can add swipe gestures to your home screen for certain actions. For example, a swipe down could reveal your notification drawer, without you having to actually swipe from the top of your phone’s big screen. You can read more about how to do this in our guide to Android shortcuts, and you might also want to check out our list of Android home screen replacements, which may also provide some one-hand friendly layouts

Typing on a keyboard with one thumb isn’t exactly fast, and if you’re typing out more than a couple words, you’ll probably want to use both hands. But for quick texts like “on my way,” one hand works well… as long as you can reach all the keys.

Many keyboards, on iOS and Android, have a one-handed mode that shifts the keyboard toward the right or left edge of the screen, so you can reach all the keys with a single thumb. On iOS, you’ll usually find this option by holding the globe icon and enabling one-handed mode. On Android, it can vary from keyboard to keyboard. Google’s Gboard, for example, lets you switch to one-handed mode by holding down the comma key. It won’t make typing on a phone enjoyable or anything, but it’ll at least save you from making so many typos.

Melissa Mwiti
16:28 12 May 20
Guys, I should have done this earlier... Thank you so much for the new lease of life you gave to my HP laptop. It's... performing much better than I expected and I am so glad I found you guys :) :)read more

Annyustar Mugure
13:56 20 Apr 20
They were professional and did exactly what they said they would do. Prompt and a good job well done. Thank you very... much. Highly recommended.read more

Gavin Kwame
19:57 14 Mar 20
I had my Huawei Y9s fixed within the same day. Was also privileged to get unique accessories like covers and a pair of... earphones. Above all, good customer service. Six star experience! 👌read more

Peter Githenya
12:07 13 Mar 20
It is the best electronic shop with the most effective and efficient professionals to have your phones, laptops, and... other electronic gadgets fixed. Its customer care is just excellent. The environment is just serene. Relax, these guys got you!read more

Jane Nderitu
14:24 04 Mar 20
Thank you wefix team. You have good customer service. You fixed my mate 10 lite phone which had an issue with the... screen and a swollen battery and the made it back to new. Great service. Big up guysread more

Kenneth Karanja
15:25 24 Feb 20
I had screen & battery issues with my iphone & the we-fix team did a great job diagnosing & fixing the problem. Now my... phone is as good as new. They have quality services not to mention the warm reception.read more

Patrick Mburu
07:49 20 Feb 20
Nice repair shop for electronics. They also sell phone accessories. I had a challenge with a job they had done for me... but my complaint was handled professionally by the friendly staff.read more

brian mandela
17:40 31 Jan 20
Great customer care and services. Worth your money. Thanks for the services.

Montana Njaaga
18:47 21 Dec 19
Friendly and homey. After my screen cracked I was devastated. I was desperate. Their price for replacing my screen was... reasonable, considering their location. As I said the staff are friendly and the space looks chilled and clean. Keep it up!read more

emanuel akomo
11:27 05 Dec 19
Efficiency and convenience is what I experienced at WeFix. Keep it up guys. I recommend Wefix Tech for their... professionalismread more

my importers
10:33 11 Nov 19
These Guys Are Excellent in Delivery, I Delivered My Phone,Waited and in 45 Minutes I Had it Done.Very Clean, Securea... Convenient Location.No Hasslesread more

Beauttah Wandera
07:21 17 Sep 19
Fixed my broken screen that was shoddily done by a supposed dealer. Device is as as good as new. Then they follow up on... device functionality just to make sure you're a happy customer. I recommend Wefix Tech for all your device repair with 100% confidence they'll do a splendid job.read more

Reen Kimberly
05:10 17 Aug 19
Professional repairs and great customer service... Took my HP laptop for fixing and they did a good job. Thank you.

James Karundu
17:57 15 Aug 19
My office phone was fixed in record time. It had a cracked screen. The job was well done + we experience great... customer service. I highly recommend We fix Tech for phone and tablet repairs.read more

Johnson Kyama
07:57 05 Aug 19
Very proffesional, very thorough on their work and excellent customer service. The customer service team are very... friendly and welcoming. Definitely worthwhile and would recommend it to anyoneread more

Dennis Wairey
14:13 11 Apr 19
WeFix Tech really came through for me today! 🙌🏽 They came for my iPhone from our office, fixed it and brought it... back on the same day!! Did I mention that they gave me a free phone to use for the day while they were fixing mine? Oh yes they did! 😁 #HappyClientread more
Next Reviews
Contact Us

You have Successfully Subscribed!